3 Amazing Benefits of Ordering Food and… 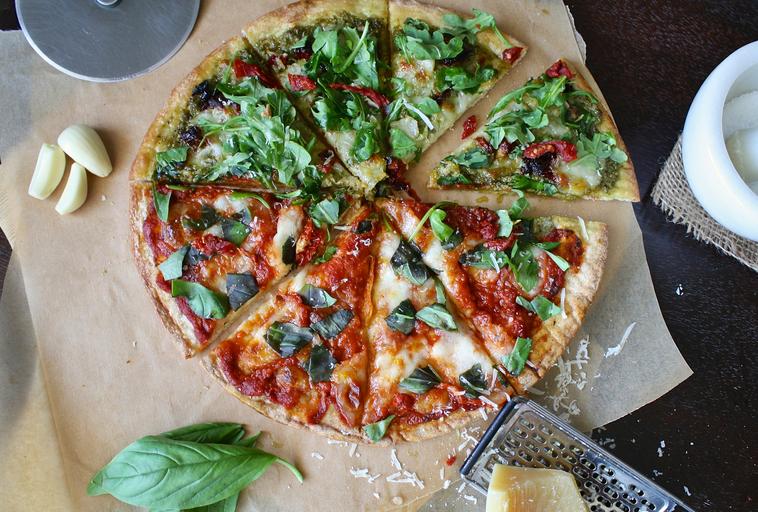 You could be forgiven, appreciated even, for thinking that pizza is therapeutic. If there is one companion that we so desperately need a company with during our non-stop Netflix binges, is a rich and nuanced slice of pizza! Of course, navigating between different kinds of pizzas (and more so, the best) in the city can sometimes be a daunting task. But fear not! We have compiled a list of the top 5 regional pizzas in the US which speak volumes about the local and immigrant cultures meshing very well together to provide you with the best pizzas that you so deservingly crave!

While you sing along to “in New York, you can be a new man” from the title track of Hamilton, you might naturally want to take a bite out of a delicious pizza. Easily the most popular and beloved pizza style across the US, New York-style Pizza  is perhaps synonymous with the word pizza itself when every American thinks of pizza.

An emblematic representation of the immigration status of New York, this style is a direct heir to the Neapolitan-style pizza in Italy and has very nice and thin gas-cooked rounds. Its uniqueness is the size of each slice, which is large enough to satisfy one’s hunger. Its thin and hand-tossed crust is enough to make you quiver with absolute joy (believe us, we tried!).

It is usually sold in terms of slices and its quintessential toppings include shredded mozzarella cheese and marinara sauce. You can also order custom add-ons which would only make its already crisp and chewy slices more appealing and teasing!

While moving towards the vast Midwest regions of the US, one particular pizza style is sure to catch your eye with its warmth and catchiness. Three different and distinct cheesy flavors of Cheddar, Provolone, and Swiss smoothly get churned up together in St. Louis-style pizza to provide you with a one-of-its-kind and almost intoxicatingly delectable eating experience. This cheese blend, known as Provel, is more than enough to quench your thirst and longing for a traditional yet exotic kind of pizza.

Apart from the aforementioned cheese blend, its anatomy is marked with a crisp, thin and unleavened crust which only seems natural and fitting with its carefully and neatly cut slices in the form of squares which are quite the eye-catcher. Unlike the other styles, the cheese and toppings are spread right up to the crust’s corners, which makes it quite unique and appealing.

If there is any pizza style that could make you feel “safe and warm” as the Mamas and the Papas intended in their longing for California in California Dreamin’, it is, without any hint of a doubt, the California-style pizza.

Perhaps second in popularity only to the New York-style, California style has a similar thin and crispy hand-tossed crust, which instills a special flavor in your mouth which you can savor for as long as you wish to.

It beautifully and sophisticatedly captures the aura of New York-style and meshes it flawlessly with the quintessential California cuisine cooking techniques, which gives it a rich and highly intriguing sensation enough to help it establish its own identity in the ever-expanding pizza world.

It can be topped by both traditional and not-so-traditional; distinctive add-ons like goat cheese, Peking duck, smoked salmon, avocados, figs, beets, and arugula.

As you find yourself grooving to another classic musical, Chicago, albeit entrenched exclusively with a jazz touch unlike Hamilton with all its alluring aesthetics and vibes, you can’t go wrong with ordering a traditional Chicago deep-dish style pizza!

With its thick base, often somewhere between 1 to 2 inches in depth, forcing you to make your companion out of a knife and a fork on your table. This style gels extremely well with your innate desire to consume a thick, heavy, and buttery taste pizza. Hence, also known as deep-dish pizza.

Its thick crust having a slightly yellowish tone is complemented beautifully with a topping that includes meat, vegetables, and mozzarella, as well as tomato sauce. However, these toppings are placed in a reversed manner, having the cheese layer at the bottom. You can also opt for the classic crumbled Italian sausage which would make your pizza-eating experience highly exclusive and peculiar with its out-of-the-world effect on your taste buds. To further enhance the experience, you are always welcome to try out further toppings like peppers, pepperoni, and mushrooms.

Just before you take the midnight train going anywhere while trying to figure out the exact location of South Detroit mentioned in Don’t Stop Believin’ (hint: it’s not even in the US!), nothing could do you better than a smooth and cautiously carved out a rectangle-shaped slice of a classic Detroit-style pizza!

With its thick crust which is simultaneously crispy and chewy, it takes you to a highly captivating journey (bad pun alert) of immense food consuming experience which is both similar and distinctive to the Chicago style owing to its trademark thick crust. On top of that, it is actually baked twice so that the cheese can flawlessly absorb in, giving it a unique brown-colored crust due to its caramelization. These distinctive characteristics provide an unforgettable bite of pleasure to the consumers.

Fun fact: It was actually first invented in its now popular rectangular shape when a baker opted for metallic trays to fit it in instead of the traditional trays.